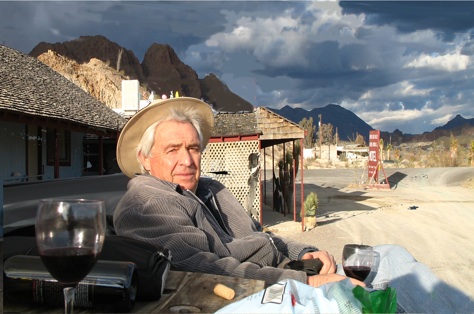 I've bought Paul Folwell paintings, from a Santa Fe gallery and direct from his studio, because the ...man is saving the West!

He's saving it on canvas. The here-and-now outside the American West. What's left of it. He paints the reality that strokes today's Skier, backpacker, climber, runner, biker, and to quote a Frederic Remington book title, his work is "done in the out of doors"

Paul grew up in Colorado, as I did. He learned to ski the mountains before he learned to paint them. Until his kids were grown he made his living as a skier, more prominently as part of the original team that created Purgatory Ski Resort. Paul's Park, an expert glade on the backside of the Purgatory, is named for him.

Skiing is physical, and Paul describes himself as a physical painter, but there's more to it than that, as you can see in his paintings of skiers and motion. "When you ski you don't create the terrain. you take it as it comes.

"Sure, you have to know the physics of skiing, but you don't think about it. You let it happen. You feel it. It's the same way with my painting. You pick the right tools, mix good color, choose the surface. Once that'sﾠdone, you let the spiritual part take you where it will. All you do is the first stroke." "That's what Jackson Pollack

did, but the Japanese Sumi painters were doing it long before him. To take a loaded brush and in a few strokes make a sparrow -  the simplicity! Its an exercise. Its a natural thing. You breathe.  You're relaxed and positive. You take the loaded brush and follow it. The more disciplined you are and the more technical knowledge you have, the more things will flow. The great painters have it-the relaxed flow. It opens the door."

But this man's paintings aren't about painting. They're about the West, that scarce reality that gives a little breath to the crowded-out individualists of the world. And he knows his territory- from years of skiing it, fishing it, hiking it, flying over it and of course, driving threw the heart of it in a succession of beat up vans.

"I'm a sucker for a dirt road," Paul says.  Ask him what he likes about the West and  you will get a random list: The Salmon, the Big Sandy, the Laramie. The San Juans,  The Lost River Range, the Confusion Mountains, the Nebraska Sand Hills. Elko County, Nevada; Wayne and Garfield County, Utah; Rio Arriba County, New Mexico Escalante, Utah; May, Idaho; RedLodge, Montana; Burns, Oregon."These are places I like for no particular reason," he says, adding:

the sky. I like to watch the sun come up and go down anywhere. I like sitting outside my studio watching the way the light falls on a 55-gallon oil drum."These things must be painted on location. Otherwise you can't smell the sage or listen to the birds sing. this is why I am a painter." And this is why I buy his paintings.